We can deliver mechanisations for different kind of production lines according to the needs of the customers. 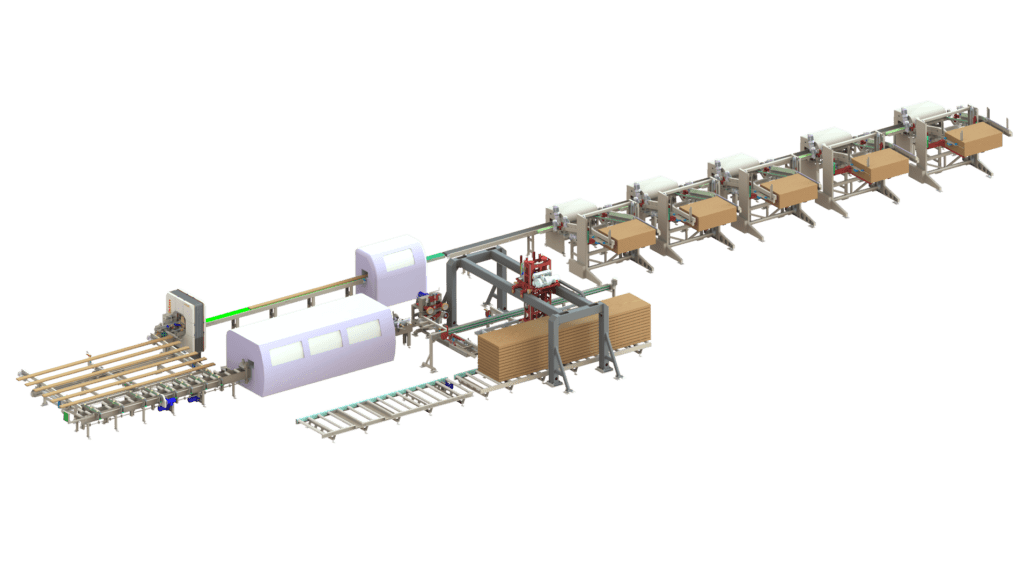 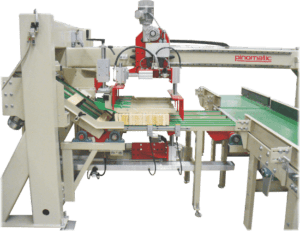 For planing lines we can deliver full mechanization from feeding until the end of the line, to the speeds of high capacity planing machines.

Pinomatic delivers painting lines for both wide and narrow pieces. 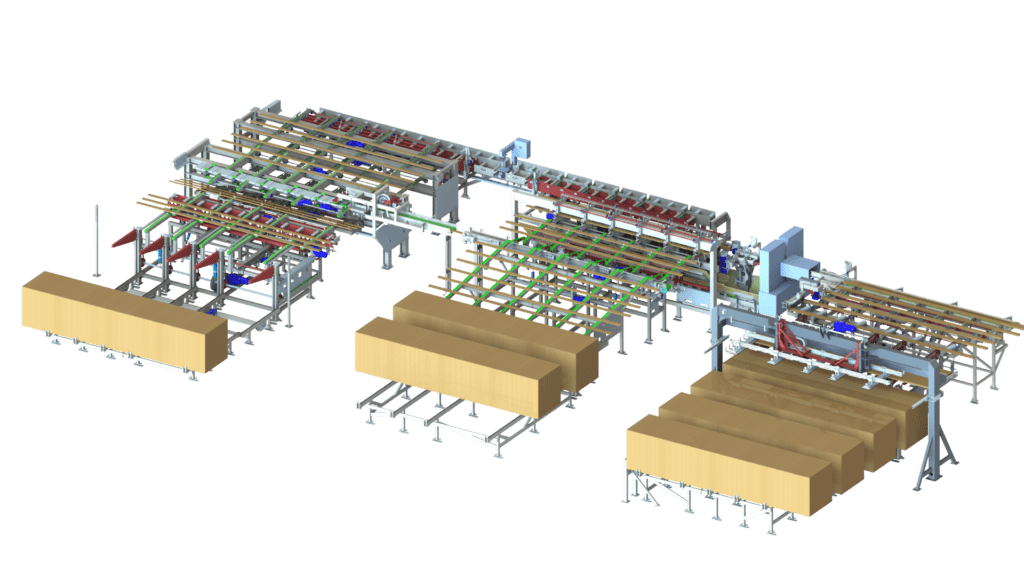 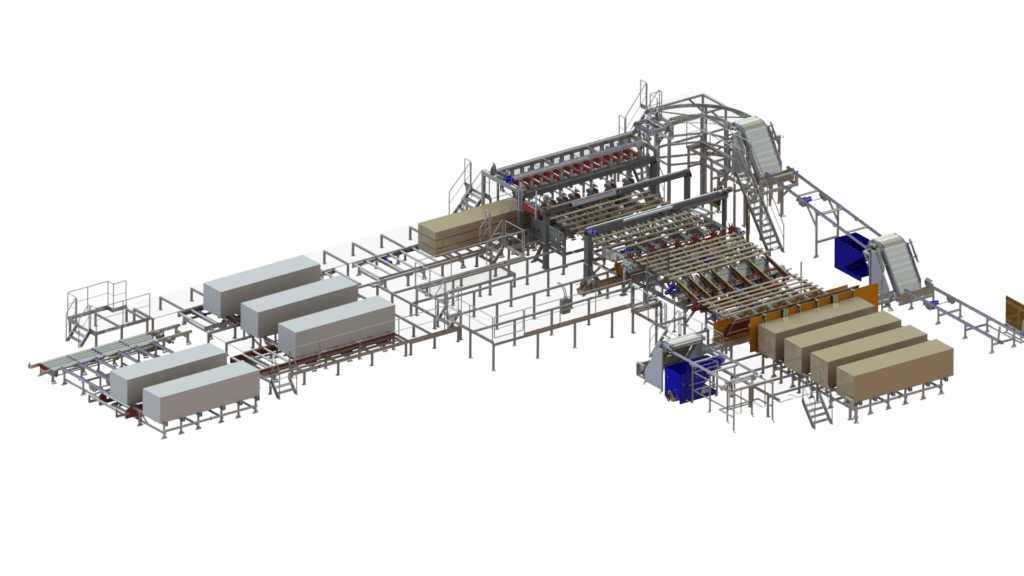 For door- and window factories we have made hundreds of projects.

For door equipping and packing lines we offer complete deliveries. The line offers excellent working ergonomics since the doors are not manually lifted or processed in any stage. We have solutions for every work stage.

For the window industry we deliver machining lines, where the woodworking machines are linked into one unit. Our deliveries have ranged from smaller lines up to mass production line with the length of over 400 meters. We provide solutions for the mechanization of both sash- and frame lines.

Edge gluing press line deliveries we have made over a hundred around the World.

Most deliveries have been for manufacturing edge glued panels from different types of wood, but many deliveries have also been to component production in door- and window factories. 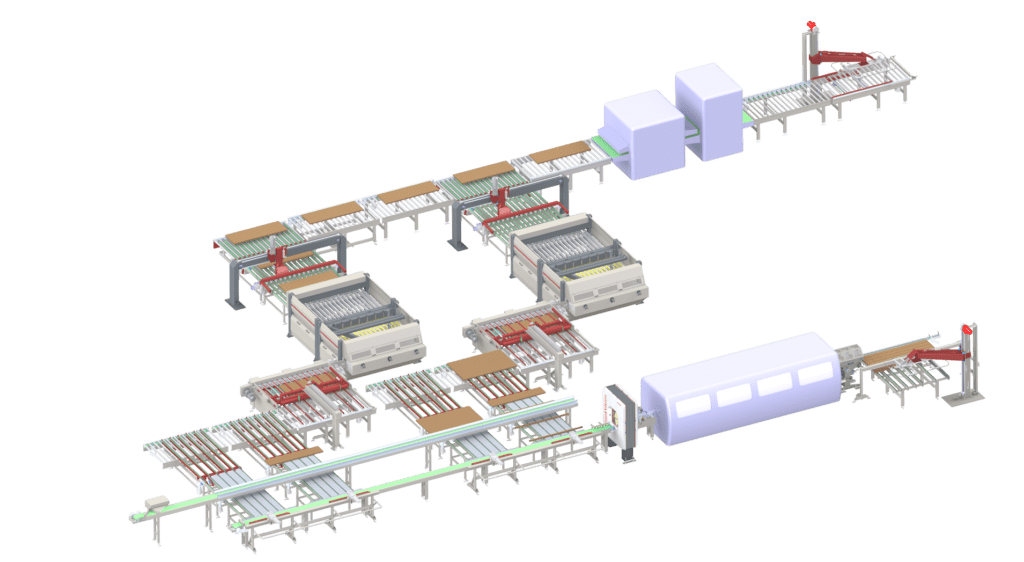 Pinomatic has been mechanising different sizes production lines for glulam production and has extensive knowledge and experience of the lines.

For glulam pressing lines, we deliver equipment in the front of the press for the grading of lamellas and preparing the lamella batches, which can be done using the formulas made by the Pinomatic IPC (Pinomatic Integrated Production line Control). At the end of the pressing line, there are devices for the separating and stacking of the glulam beams.

The glulam beams can be trimmed to lengths on the glulam planing line. After the planing, the quality of the glulam is checked and they can be guided to a repairing station, if needed. At the end of the line, the glulam beams are stacked and packaged.

According to the destination and the needs, the actual lamination of the elements can be completed with surface polishing and the cutting of openings and, in relation to complete building elements, with the installation of insulation material, doors and windows. The boards needed in the elements can be finger-joined and planed at the same factory. 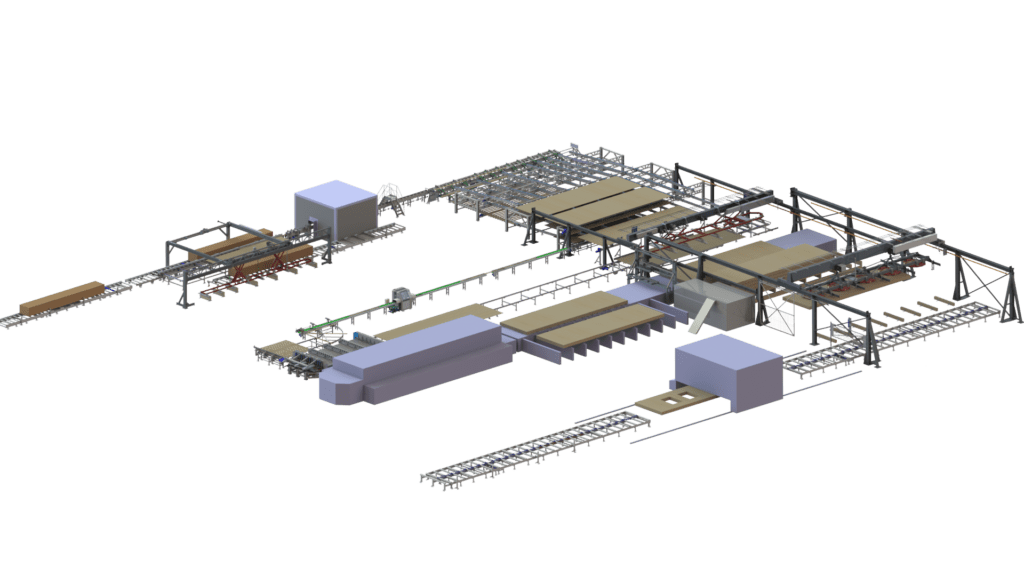 Pinomatic offers a log house production package that includes production solutions from the production of lamella logs and non-settling logs to planing, machining and packaging. 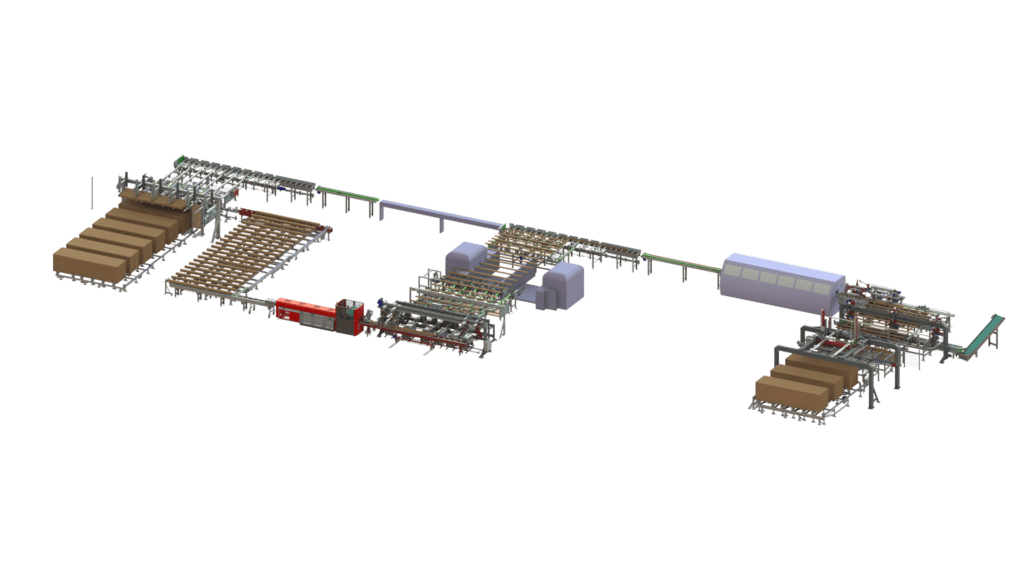 For moulding-, panel- and parquet factories we have made hundreds of projects around the World.

We can deliver finishing lines for both wide and narrow pieces.

In the largest delivered lines the pieces are surface treated three times and move over 230 meters along the line.

In the gripping technology we have solutions for wane timber, as well as mechanical gripper for stacks where the upper surface is not even.

Pinomatic stackers and de-stackers can be used both in the infeed of components to the pallet machines, as well as at the end of the machines, stacking ready made pallets.

We have infeed solutions for feeding directly to pallet machines cassettes. Pinomatic has developed also camera system which detects the wane side of the boards and turns them so that boards are infed to cassettes on the right position. We can handle side board, deck board and bottom board, as well as blocks. 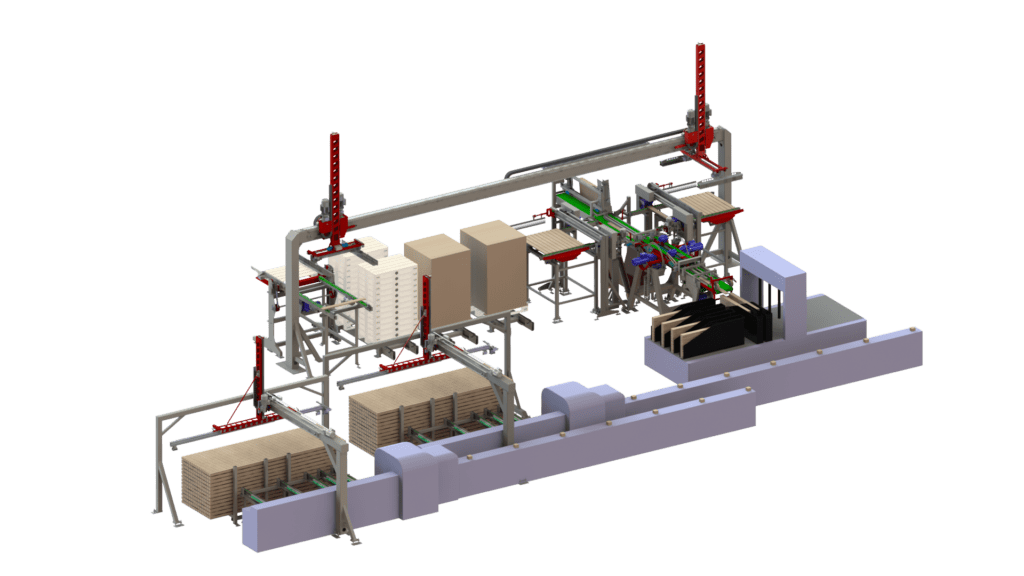 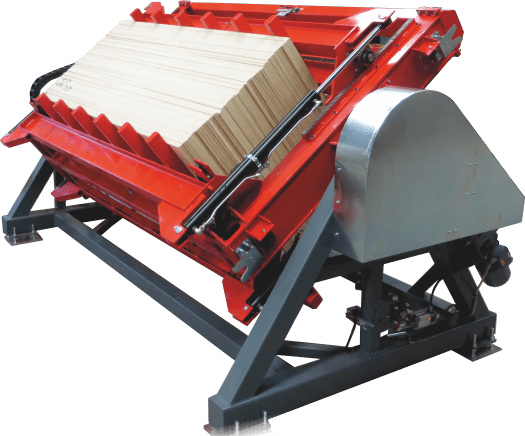 Pinomatic can offer the plywood industry a variety of conveyor and mechanisation solutions, as well as stacking and de-stacking equipment.

In the stackers is utilized vacuum technology, for example. These solutions provide flexibility and cost-efficiency in production, as one vacuum stacker is able to stack a number of grades and dimensions at the same time, such as finished plywood for customer-specific stacks. In the stackers that we have delivered, has been as many as 15 stack stations side by side. Pinomatic stacking and destacking equipment is available in many different models. Nearly 400 stackers have been delivered to different stages of production in the wood industry. The Pinomatic 2400 and 3400 models of stackers are especially suitable for plywood production.

As an example of other mechanisation solutions can be mentioned bundle turning device, which can be employed at different stages of the production of plywood, to turn veneer bundles or plywood bundles. Bundles are brought to the turning device as well as received from the device on the same side of the device, thus meaning that the device takes up minimal space.

Pinomatic can offer the LVL industry a variety of conveyor and mechanisation solutions, as well as stacking and de-stacking equipment.

In the stackers is utilized vacuum technology, for example.

Lifting device that is deigned for LVL production can handle LVL beams which length is max. 13 m and weight max. 500 kg. This equipment is suitable also to low spaces. 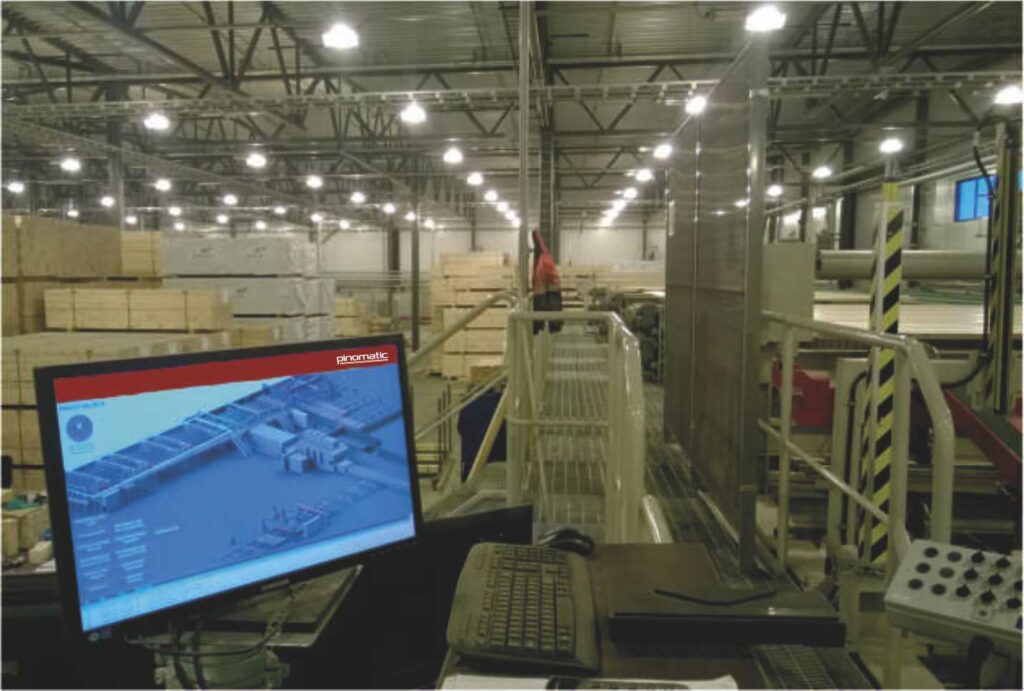 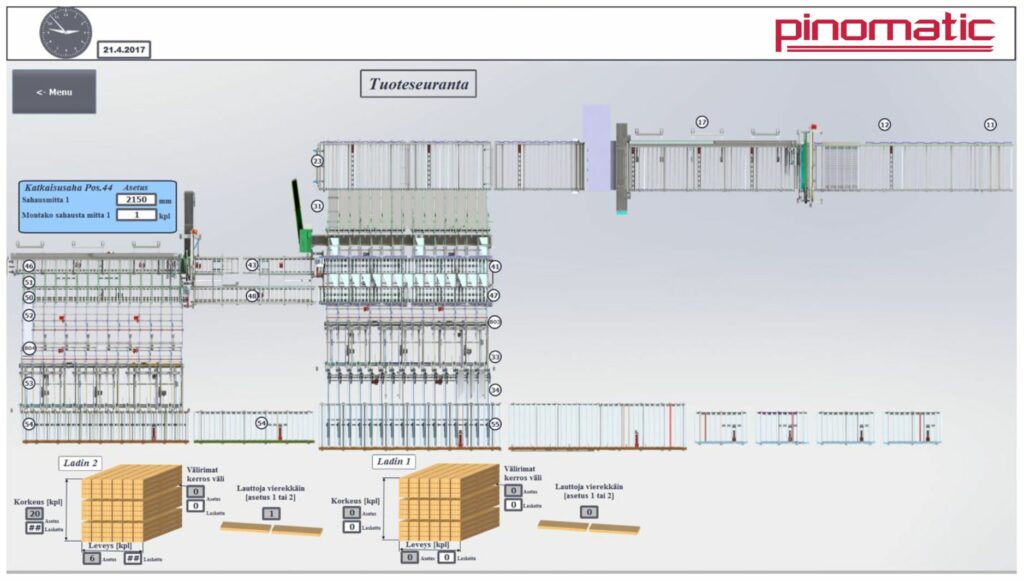 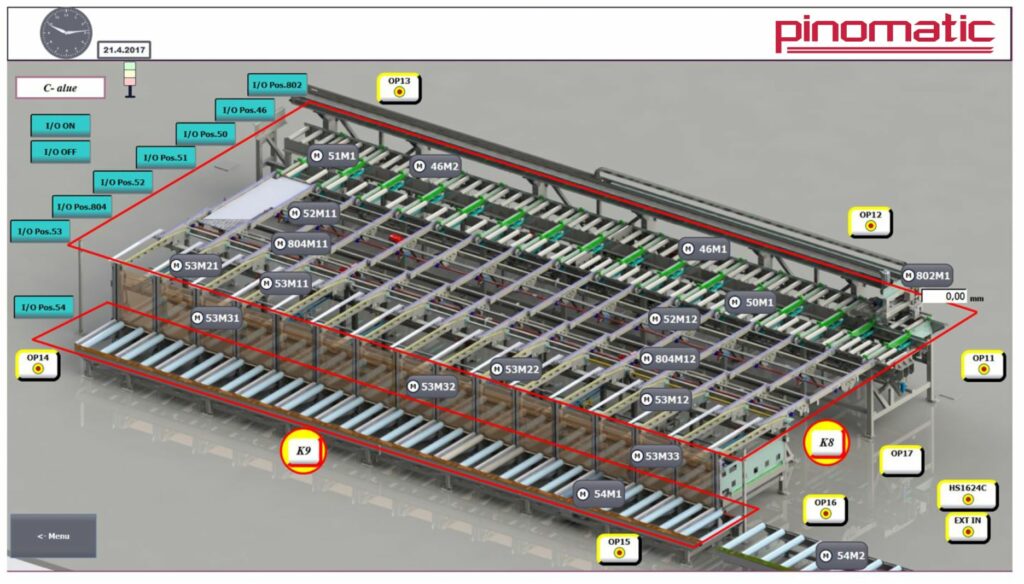 Prominent characteristics of Pinomatic deliveries has always been the high level of automation and ease of use of the equipment. Pinomatic IPC (Pinomatic Integrated Production line Control), developed by Pinomatic, provides a significant increase in line utilization thanks to centralized control. Making the settings takes less time, as they can be done from one place. Also, possible disturbances can be quickly located and eliminated, without using the time for searching for the reason of the disturbance. Also, woodworking machines and other equipment delivered by other machine manufacturers can be connected to the IPC system. New machines and equipment usually have the ability for this control feature already built-in, without exception.

Formulas for the different products

For each product produced on the line, production plan can be created and saved in an Excel form, for example, to a file, where the production information is retrieved. When the data is retrieved by the IPC control system, it becomes a formula, according to which the line machines are controlled.

The formula includes, for example, conveyor speeds, machine and equipment settings, as well as other technical settings. When the product that is produced on the line changes, the line’s technical settings can easily be adjusted just by changing the formula file, from one terminal. The production plan can still be modified from the IPC control system. Also, machine settings can be checked and even changed during the drive. When the production part is at the end, it can be acknowledged as a readymade and it can be included with real production output, as well as with waste and quality information. In the same system can be added possible malfunctions, jams, alarms, and the information of the safety elements.

The most significant benefit that the IPC control system can offer is the rapidity of settings and the fact that a new product can enter the line immediately as soon as a new formula has been introduced. This is particularly useful for long lines, such as painting lines. Pinomatic has delivered the IPC control systems also for glulam lines, cutting lines, planing lines as well as on element lines, for example.

The IPC control system can be also included with different kind of statistics and production reports including, for example, waste, run metres, the number of pieces, m3, drive speeds, etc. The features can be implemented according to the needs of the customer. With the help of the IPC control system, the line support can be increased to also include the utilization rate of the machines and the controlling of the machines condition.

In production line implementation we use our standard products combined to the customer’s individual solution.

In here you can become acquainted with our standard products. 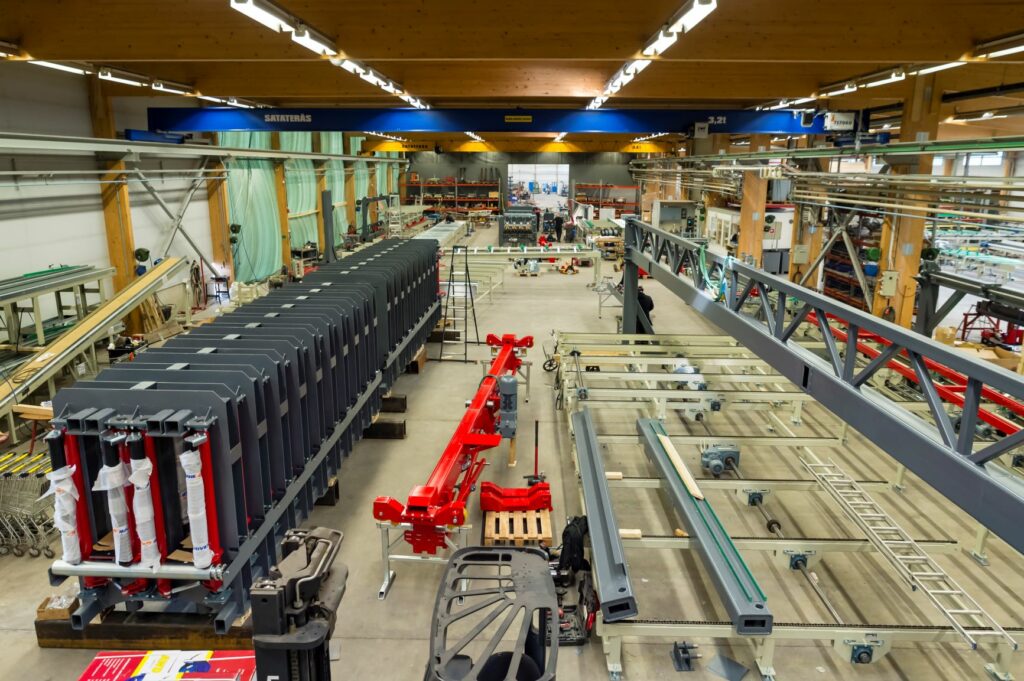 We have several standard models of stacking devices. They are all suitable for different purpose in production.
Get to know our stackers here, and contact us for more detailed information.

Below you can see all our stackers! 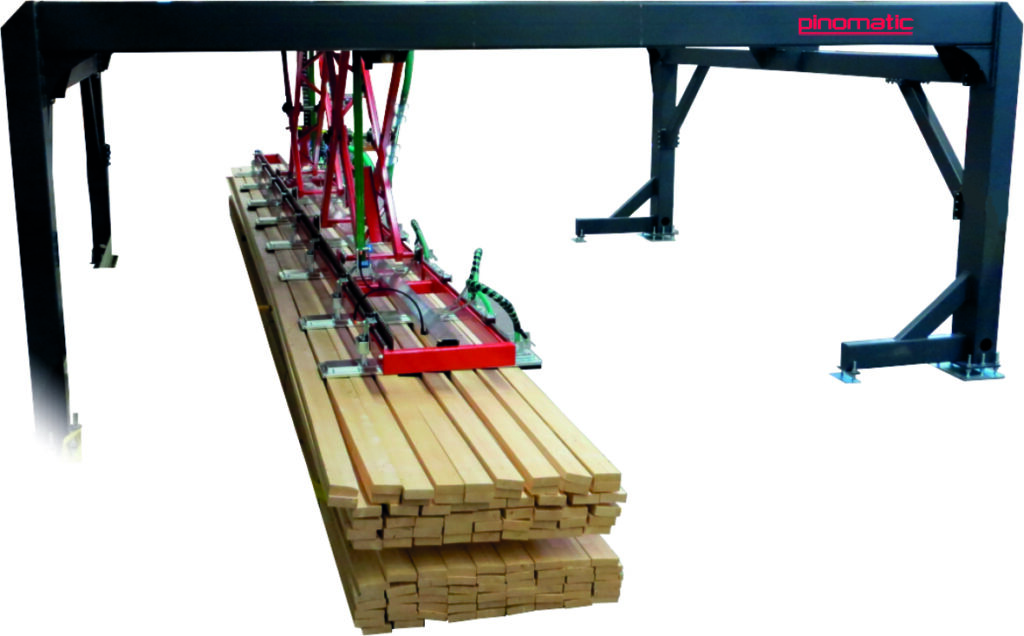 Almost each of our deliveries contains a specific number of conveyors. Our delivery programme includes belt, roll and chain conveyors, produced individually for each customer, following the needs of the customer.

The conveyor range is from light conveyors for furniture components to massive timber stack conveyors. The combination of appropriate conveyors with competent programming form the basis of a properly functioning production line. 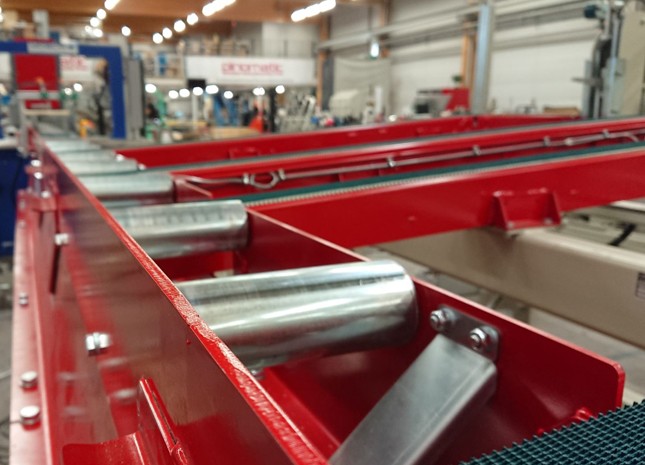 Pinomatic Wood Vision Evo4 is new and even more efficient and accurate wood optimising and grading system. The latest fourth-generation device has many new features, the most notable being double lasers and new cameras. The operation of the equipment is based on the use of cameras, laser projectors and an intelligent computer program, all of which work together. The scanner is capable of recognising any defects that it is possible to see with modern camera and laser technology; such as knots, cracks, pith, resin pockets, wane, blue stain, decay, compression wood and dimension faults.

Generally Pinomatic Wood Vision Evo3 scanner is used for quality control in areas such as; on cross-cutting saw lines and planer/moulder lines, as well as in other targets where pieces move in longitudinal direction.

Pinomatic HotLine shrink packing machine is suitable for the packaging of long pieces, such as mouldings, panels and parquets. In the packing unit, the bundles are wrapped automatically into a plastic sheet from a roll, and the ends of the sheet are welded tightly. After that the bundle is transferred to a heater, where the plastic is shrunk tightly around the bundle.

The shrink packing machine is available in two different capacities, as well as many different optional equipment, according to the needs of the customer.

Our delivery programme also includes equipment for the packaging of wide pieces, such as doors and edge glued panels.

We have in stock both models of shrink packing machines ready for fast delivery. 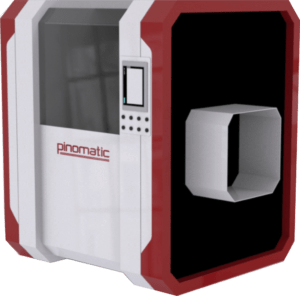 We have produced various special cutting machines to the needs of our customers. The machines have been installed for cutting frame components, for splitting and cutting glued components in connection with edge gluing presses, in front and at the back of planing machine for cutting components into sizes, and after finger jointing machine.

Our new optimized crosscut saw is suitable for fixed-length cutting, length optimization and cutting out defects and it can easily be connected to all scanners on the market.

The machine has been developed using 30-year expertise of Pinomatic in machine building. The design has been based on a robust body and the use of materials from durable components. The goal is a reliable and long-lasting saw in continuous production while keeping the purchase price competitive. 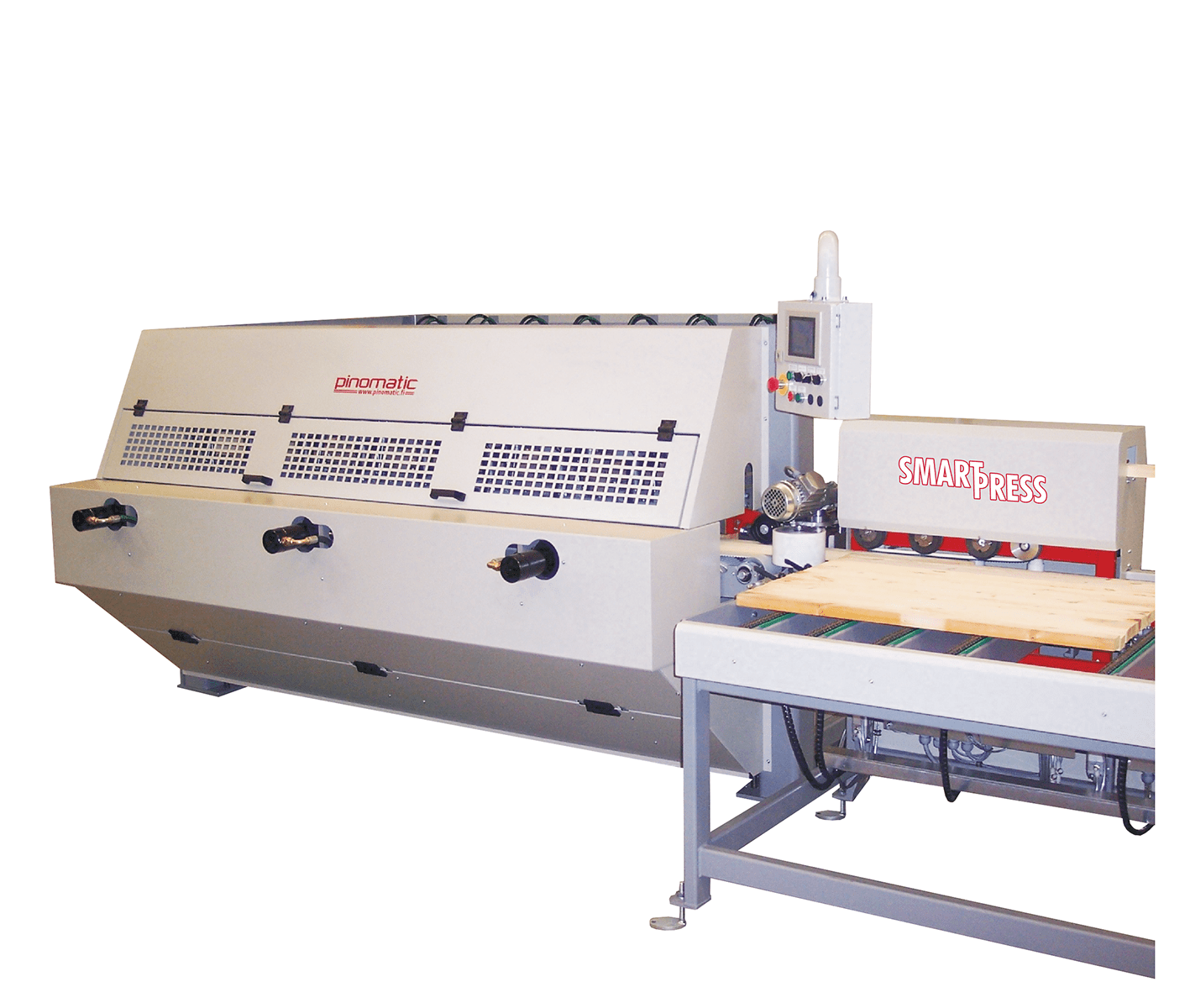 SmartPress is designed for small and medium size enterprises and is suitable also for smaller production series. The quality of edge-glued panels is still completely equal to that of panels which have been made with our high efficiency presses.

SMARTPRESS is a continuously working friction press.  Due to the heating process, a good glue joint is achieved in as little as three minutes during the through-feed time.

The unit’s frame is a strong friction press which is equipped with a hot plate construction. It is suitable for both hardwood and softwood.

InnovaPress operation is continuous. On the front end of the press, the “warm part”, the glue, is activated quickly, which enables an essential shortening of the time taken in pressing. At the rear end of the press there is a cooling area.

The warm treatment is the equivalent of the technique used by the warm platen press but the operating properties of the friction press – such as a minimised need of sanding on panels and its suitability as an inline machine in the continuous panel process line – still exist.

The press settings are very simple to set thanks to the high automation level. 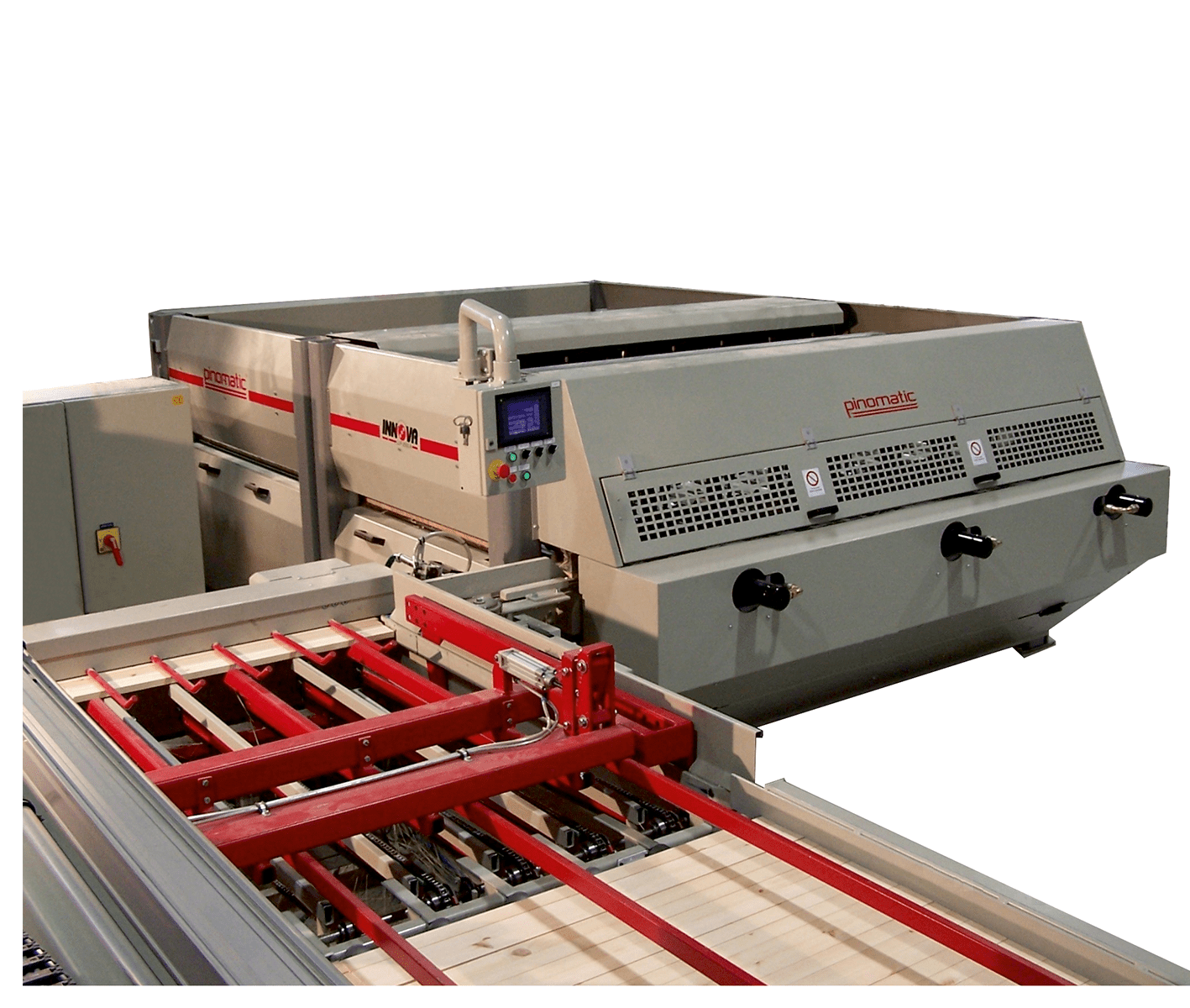 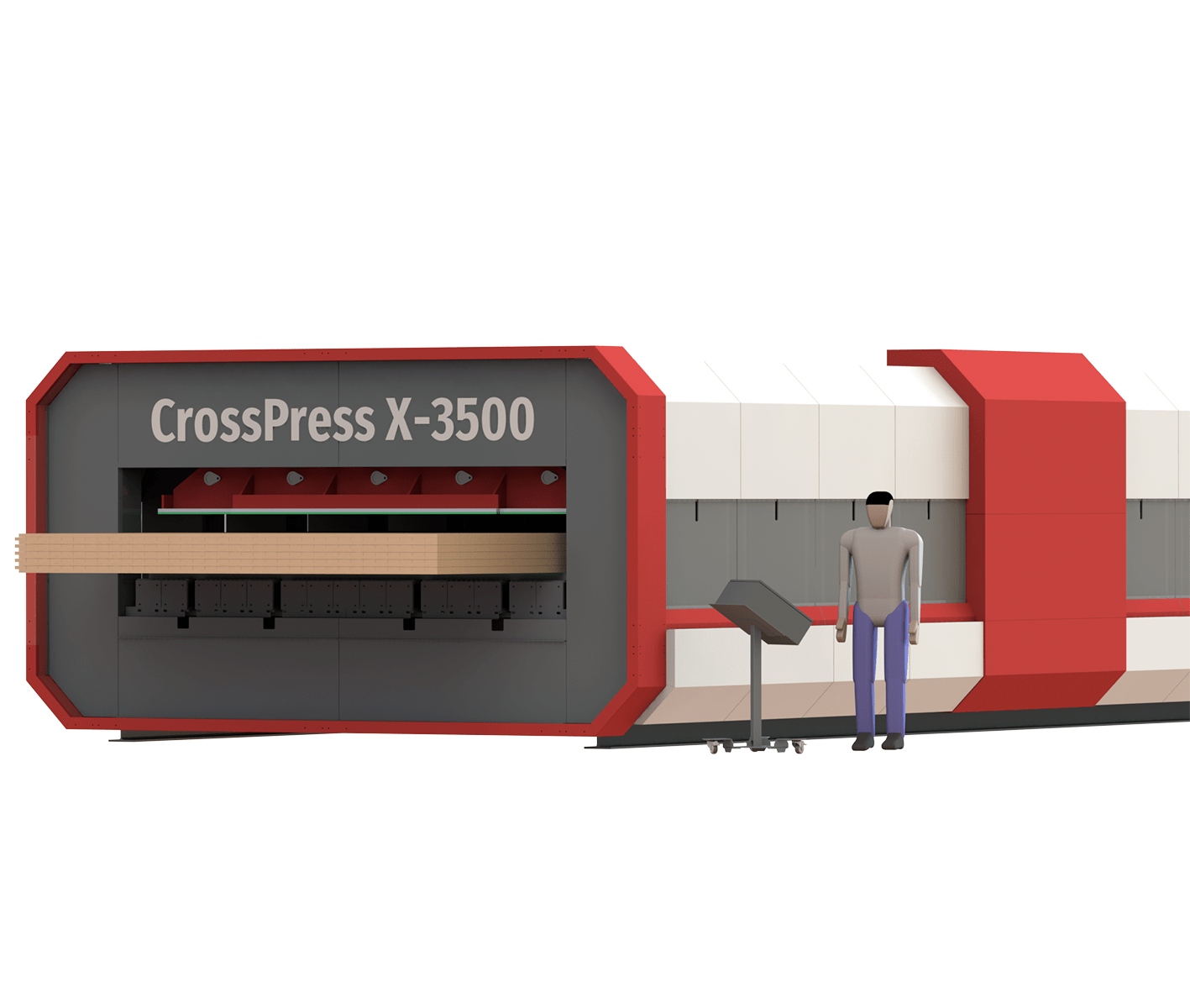 Our long experience in press manufacturing and our engineering department’s innovative solutions are combined in this equipment. Delivery entity includes also conveyors and glue spreading between the layers.

We also manufacture presses for log and beam industries.

There are almost unlimited number of ways to use robots in woodworking industry. And they offer considerable advantages.

From extensive range of model can be selected the most suitable robot for different purposes. Ask more about the technical specifications! 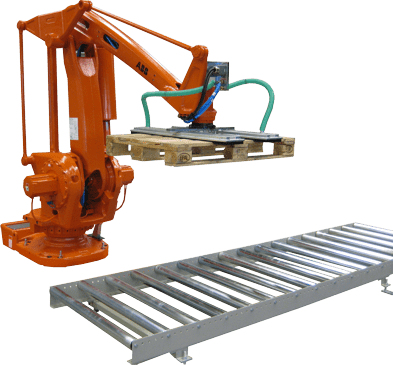